This story was produced in partnership with the Pulitzer Center and is reprinted from Religion News Service.

Not long after Hurricane Sally made landfall in mid-September, an army composed of mostly senior citizens in yellow hats descended on the Gulf Coast.

Outside of Hillcrest Baptist Church in this town on the state’s panhandle, a dozen volunteers from the Florida Baptist Convention got to work in a mobile kitchen, preparing thousands of meals of Salisbury steaks with a side of vegetables for residents left without power or a place to live. Around the tent were stacks of warming containers, waiting to be filled with meals and loaded in Salvation Army trucks to be distributed in the community.

Inside the church, another group of volunteers collected requests for offsite assistance and sent out teams armed with chain saws, hammers, buckets and other cleanup equipment — along with masks, gloves and other COVID-19 protective gear — to help residents clean up.

A few miles from the church, in a neighborhood where lawns were piled high with furniture and tattered drywall, a team from Savannah, Georgia, was already at work cleaning out the home of 74-year-old Karl Henderly.

Denise Young, 65, a volunteer chaplain, was cleaning up the house’s living room. She and her husband, Tom, started doing disaster relief four years ago after they retired. This is their twenty-eighth deployment. The two are trained in flood recovery, working in a kitchen and even working on a chain-saw crew. 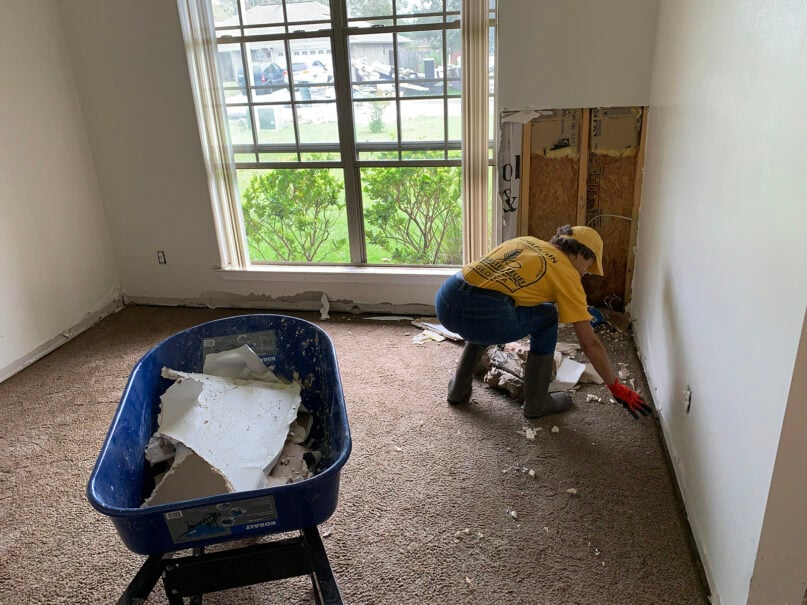 ‘I just serve the Lord’

In the entryway, Rich Zimenoff, one of the volunteers, was busy removing screws from bare studs. A former volunteer firefighter, the 68-year-old has volunteered for disaster relief for the past 11 years.

“I just serve the Lord and here I am,” he said.

The volunteer teams in Pensacola are among 80,000 Southern Baptists who have been trained in disaster relief, making them one of the largest volunteer disaster relief organizations in the country.

Their denomination, in turn, is among the 74 constituent groups of the National Voluntary Organizations Active in Disaster, a network of disaster relief nonprofits, of which more than half (40 in all) are faith organizations — Baptists and Buddhists, Catholics and Disciples of Christ, Methodists and Muslims, Lutherans and Latter-day Saints.

They’ve all been busy the last two years. Since January 2019, the Southern Baptists alone have responded to 136 disasters across the country: hurricanes and tornadoes, wildfires and floods, with more likely on the way.

Between their recent responses to Sally and Laura, the hurricanes that scoured the Texas and Louisiana coasts in late August and early September, the Baptists had prepared almost half a million meals, put nearly 300 temporary roofs on storm-damaged homes, cleared trees from 2,300 more and provided more than 13,000 showers and more than 7,400 loads of clean laundry.

“When there’s a disaster, they are on the ground within 24 hours. They are a well-oiled machine,” said Robert P. Jones, president of the Public Religion Research Institute in D.C. 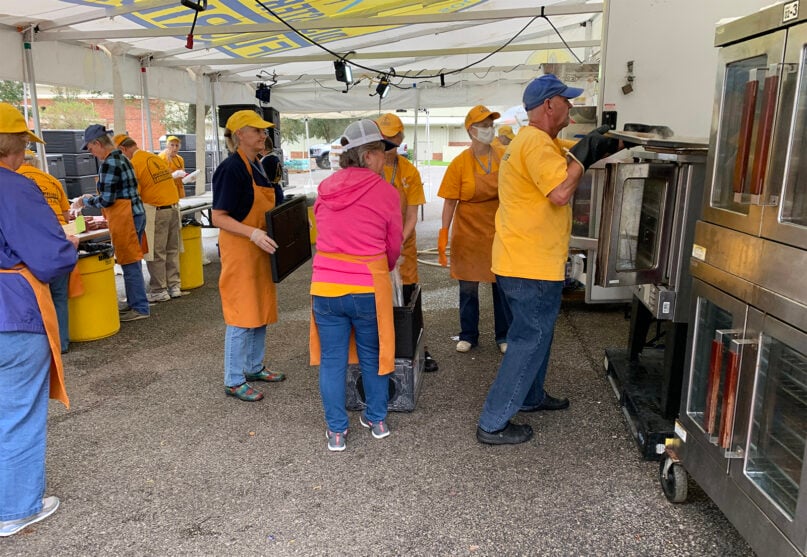 But according to Jones, the yellow-hatted army may be remembered as a largely 20th-century phenomenon. White Christian groups — in particular white Protestants — may not be able to sustain the institutions and voluntary charities they built in the past, Jones said, author of “The End of White Christian America.”

Major, mostly white denominations — United Methodist, Southern Baptist, Presbyterian and Lutheran — have lost millions of members. And those who remain are aging.

As organized religion shrinks, replaced by a spiritually unaffiliated and unorganized demographic known as the nones, how will faith-based charities respond? And who will take their place if they collapse?

Those are questions that worry Ryan Burge, assistant professor of political science at Eastern Illinois University. Burge, who has studied the rise of the unaffiliated, said that the benefits of organized religion are often overlooked.

“The average American doesn’t realize all the things that churches do to make society less awful,” he said.

Churches and other religious groups tutor kids, feed hungry people, shelter the homeless and do a great deal of good, often under the radar, he said. As religious groups shrink, those services could be lost.

Burge fears younger Americans, in particular, don’t see organized religion as useful. But “it’s one of those things where you don’t know what you had till it is gone,” he said.

Brad Fulton, associate professor of nonprofit management at Indiana University, said it’s hard to quantify exactly how much assistance churches and other faith groups provide, since much of it is provided on an informal basis and by local congregations, rather than national organizations.

Data from the National Study of Congregations’ Economic Practices in 2018 showed that about half of congregations, for example, have a food pantry or other food distribution program. According to Feeding America, a national network of food banks, about two-thirds (62%) of their 60,000 partner food pantries and meal programs are faith-based.

If those programs disappear, it’s not clear who would fill that gap.

The growth of the so-called nones doesn’t mean that belief is disappearing, but “loosely organized spirituality” among people who have few ties to each other lacks precisely the organization that can marshal thousands of key volunteers.

“They don’t congregate,” Fulton said. “And that is the key thing.”

In some ways, the infrastructure of religion matters more than the spiritual part. The so-called nones, at least for now, can’t replace that.

“There is some upside to organized religion that has very little to do with religion,” he said. “They have a great mechanism to bring people together. It is really hard to identify an organized secular equivalent.”

Concerns about the future

Some of the Baptist volunteers in Florida worry about the future.

About an hour away in Silverhill, Alabama, a chain-saw crew from Clanton, Alabama, led by retired schoolteacher Joe Mims, tried to sort out the best way to remove a pecan tree that had fallen on the roof of Claudia Barbee’s house.

Pecan trees are brittle, he said, and if they try to remove the tree too fast, it could break and cause more damage.

The 76-year-old Mims, a soft-spoken man with a keen sense of humor, keeps a close watch as two team members climb on the roof and start cutting branches one by one. Team chaplain Pam Smith sits in a lawn chair, meanwhile, and chats with Barbee. 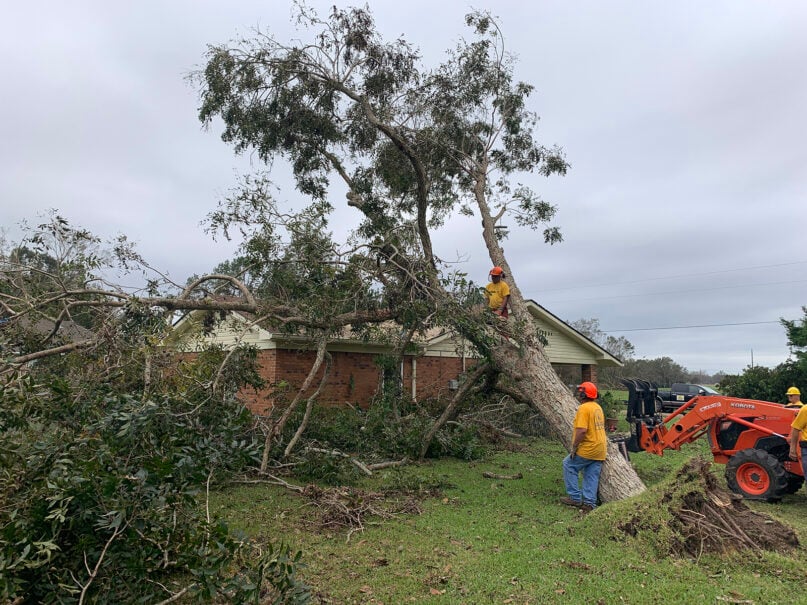 Mims, who has led this volunteer unit since 2004, and other group members arrived soon after the hurricane hit. They’ll clear trees from about a dozen houses this week, before heading home. “That’s why we are here,” he said, as chain saws buzz in the background. “Otherwise we would just be the Lion’s Club.”

While he watches the rest of the crew, a driver in a blue sedan stops by the front of the house and motions Mims over.

“How much do you charge?” the driver asks.

It’s a question that Mims often gets. The answer is always the same.

Mims said he gets a sense of joy from helping others. Before the group leaves, he said, they planned to gather around Barbee and give her a Bible that has all of their names written in it and pray for her. It’s something they do at the end of every job and a moment that usually leaves people crying.

“That means we have made an impact in their lives,” Mims said.

The work makes an impact on the aging crews of volunteers as well. Sam Porter, the national director for Southern Baptist Disaster Relief, is a longtime believer in getting people out of the pews and out into the world, where they can do hands-on work for the benefit of others. He is amazed by the work that retirees and other older volunteers do.

“I’ve seen them come down here and it’s almost like God just gives them this steroid shot of spiritual stuff. They can get after it for about a week — working all day long, sleeping at night on air mattresses or sometimes on the floor,” he said. “When they go home, they crash for a few days.”

The Rev. Danny Rasberry, who drives a tractor for the Clanton-based team, has been involved with disaster relief for about a decade. When he’s not volunteering, the 71-year-old serves as pastor at Ebenezer Baptist in Stanton, Alabama, where he’s been for 20 years.

He actually started out as a disaster relief chaplain, but the team needed a tractor driver, and he volunteered.

“I got either demoted or promoted — I am not sure which — from being a chaplain to a tractor driver,” he said.

A few of his younger church members have come along on disaster relief trips in the past. But most are still working or have commitments they can’t get away from. That leaves mostly retired folks who have time. He worries about the future as volunteers age and aren’t being replaced by younger people.

Kevin Smith, director of the Department of Homeland Security’s Center for Faith and Opportunity Initiatives, said that in COVID-19 hotspots, pandemic restrictions may prevent older volunteers from responding. Already, groups have relied less on volunteers from out of state and hold many meetings online due to the pandemic.

A need for younger volunteers

Back in Pensacola, volunteer Tom Young also worries about the future of Southern Baptist disaster relief. But it has been hard to persuade younger people to join up and go through disaster training.

“I am a full believer that we are going to have to embrace the SUV community,” said Young, referring to spontaneous untrained volunteers who show up when things go wrong and want to lend a hand.

Incorporating untrained help to work side by side with his trained people is better than letting untrained volunteers work on their own, he said. It would be better to have “a few people there who know what they are doing who can actually lead these young folks and teach them how to do things properly.”

But Baptists on the ground like Young can’t escape the fact that their churches and their volunteer base are shrinking.

“Let’s face it — our database is going down, down, down,” he said. “We are running out of people. So, we are going to have to be forward-thinking on how we can keep this program viable in the future.”

Besides, he said, welcoming untrained volunteers, especially those who aren’t religious, would give him more time to talk about his favorite subject.

“When I am working side by side with them, I can tell them about Jesus.”

That contact with the unchurched — disaster victims and fellow volunteers alike — is what Young’s wife, Denise, thinks about most when she contemplates the disappearance of Christian aid workers at scenes like Pensacola.

“What really touches my heart the most about it is that your life might be the only Bible most people ever read,” she said.